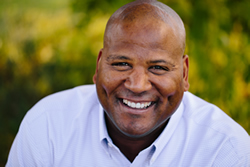 After matriculating to Penn State University as a scholarship athlete in 1985, he graduated in 1989, majoring in Finance. What has kept Brian as a resident of the area for 29 years are his ties to the community. You can find him volunteering his time and talents to charities such as The Penn State Coaches vs. Cancer, The Centre Volunteers in Medicine, The Team Ream Foundation, and Success With Honor, an organization that provides support to the many charities created by Penn Staters.

Brian began his career in the mortgage industry in 2004 and has since worked with a number of lending institutions, most recently with Fulton Mortgage Company, where he was awarded The President’s Award for top producing loan officers, as well as the Customer Service Award, recognizing the outstanding service he gives to his clients and REALTORS®.

Brian was fantastic to work with. I was a first-time home buyer - and a nervous one. Brian walked me through the entire process and ensured that I fully understood every step. He patiently ran, and re-ran, reports every time I asked! Brian understands how stressful the home-buying process was for me and made sure that I completely at ease. Oh....and I got a fabulous interest rate!!

We could have never made it through the house buying process without the help of Brian. He kept things rolling and had terrific follow through. We were taken care of in every aspect.

Brian was on the ball from the word go. My transaction took a lot longer than a standard one (totally on me) and Brian was always in touch, providing advise and recommendations. He was helpful, courteous, and knowledgeable in ever aspect of the transaction. I would recommend Brian to anyone looking to purchase a home, whether you are a rookie buyer or a experienced one.

In this very competitive market in State College, PA we were delighted to find a home and get through the buying process seamlessly and without hurdles. We were amazed that our closing date remained the same throughout without any hiccups. Purchasing a home can be stressful but with the help of Brian and his team we were able to get through everything and move into our new home without delay.I would definitely recommend his team to anyone! Grateful!!Kelly Caviston

Brian and his staff efficiently guided me through the loan process, answered many questions and kept in touch each step of the way, concluding with a settlement date earlier than anticipate. Smooth sailing from start to finish.

Brian and his staff were very helpful and knowledgable with respect to out recent refi mortgage. We were able to obtain a very competitive rate with low fees. All of the transactions progressed very smoothly.

Brian did an admirable job of guiding me through the process of securing my loan for my home. He told me step by step what I needed to do to complete the process successfully. He was detailed in telling me what documents I needed to have to make my loan application as painless as possible. The whole process was daunting, but I trusted Brian and his experience. It paid dividends for me.

I was recommend to Brian by a close friend for refinancing my house. Brian and his team worked quickly to close my loan and get me the best interest rate. My only compliant is, it seemed like they asked for duplicate paperwork a few times.

Brian is the most helpful mortgage broker I have ever dealt with in my 60 years on this earth. He goes over and above for you on getting the best deal possible. I recommend him to everyone I know looking for a mortgage.

It was my first time buying a house and my realtor suggested Brian to me. Once I met him I knew why my realtor suggested him because he was great! He explained everything about how the process would work getting a mortgage, from what I needed to do to what he was going to do. He was just so nice, knowledgeable, and easy to work with each step of the process! I would highly recommend him to anyone!

I have financed and refinanced homes many times in my life. However, since moving to PA 10 years ago I only had one mortgage experience and that was directly with my bank. To say customer service and knowledge was lacking would be an understatement! When I was forced to refinance due to extenuating circumstances, I recalled that Brian, an old college friend, was a broker and I didn't hesitate to give him a call. Besides being a truly good guy, Brian was able to help me through what could have been a very complicated process. He kept things simple and the process moved forward to close very quickly. Either he or someone on his staff was always available to answer a question or give me an assist. He did such a great job for me that my ex- used him to purchase his new home! I give Brian 5 stars without hesitation and recommend him and his team for any and all of your home loan needs!